GBS supported the NZ Transport Agency (NZTA) with the design, development and release of MapHub, a solution comprised of a range of user-focused mapping capabilities based on Portal for ArcGIS (Portal) and integrated with new Geospatial Enterprise Framework.

The MapHub solution provides NZTA with a centralised portal of geospatial information and enables their business to create a range of purposeful maps and applications which support evidence-based analysis. Since the original launch in October 2014, GBS and NZTA have released a number of new enhancements (MapHub 2.0 in 2017 and smaller functionality releases in 2018).

The NZTA is a Crown entity with 1400 staff working in 14 locations across NZ. Their purpose is to deliver transport solutions for New Zealand on behalf of the government which makes every New Zealander their stakeholder.

The NZTA is responsible for:

In 2012 the NZTA initiated the Common Geospatial Capability (CGC) project with the objective to deliver a suite of best practice geospatial capabilities, processes, tools and data to support the NZTA’s current and future strategic business priorities.

GBS was a part of the NZTA’s geospatial suppliers’ panel, in collaboration with other organisations, and was tasked with establishing the detailed design and implementation for the geospatial web based user tools.

The original solution implemented by GBS leveraged and extended Portal 10.2.1, where bespoke application tools were developed along with a custom Portal home page. This solution was successfully released into Production in August 2014 as MapHub 1.0. An enhanced MapHub 2.0 solution subsequently went live in September 2017, including additional functionality as well as some modifications. MapHub is now running on ArcGIS for Enterprise 10.5.

During the initial requirements gathering phase of the MapHub 1.0 project it was identified that the NZTA were clear on their high-level requirements, and wanted to work more collaboratively with GBS to clarify and confirm the detailed requirements.

As NZTA had very tight project delivery timeframes, GBS took a flexible approach and introduced a Proof of Concept (POC) methodology. Development was started in alignment with the project schedule, where functionality with confirmed or high-risk requirements were prioritised to be developed first. This allowed the NZTA to continue on the remaining detailed design, whilst GBS still made the required planned progress on development tasks in parallel.

It was critical that the first release of the MapHub solution had the wow-factor, as user-uptake was the critical measure of success. Feedback from NZTA staff indicated the solution was well received and the utilisation positive. Re-investment in the MapHub solution by NZTA to extend to MapHub 2.0 and subsequent enhancements continues to embed this solution as an integral part of NZTA web mapping capability 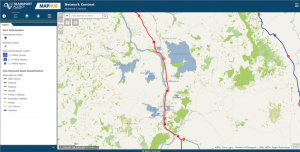 “MAPHUB inspires and enables our staff to create Transport solutions that help NZ to thrive. Without the agility, expertise and drive for results of the GBS team our big idea for a spatially enabled Transport Agency would not have become a reality.”